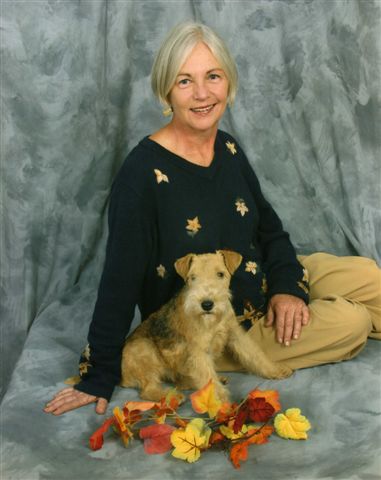 Pat Rock of Lanexa, Virginia, breeds and shows AKC Lakeland Terriers. She is a member in good standing with the United States Lakeland Terrier Club, the American Working Terrier Association, and is an American Kennel Club licensed judge for Earthdog Tests.

Pat has had a passion for genetics and animal breeding since she was a child (how many other kids did their school science project on coat color genetics in puppies?) Growing up with Pointers and Setters and always at least one terrier her dad kept as a squirrel dog she bred her first litter in 1961, studying the performance records of potential stud dogs through the pages of The American Field weekly, and shipping that first English Setter bitch in a rented crate on a train via Railway Express to be bred.

Getting involved with conformation showing was the fault of her husband. While they were still teens, he took her to her first dog show knowing she loved dogs, and because it was a cheap date… After they were married and his job had them moving frequently it just wasn’t possible to breed anything the size of Pointers so she turned to the Lakeland, having fallen in love with the look of them at that first dog show. Twenty twenty-one marks her 50th year showing Lakelands.

Of course, dogs and shows don’t pay for themselves. Pat earned an undergraduate degree in Medical Laboratory Technology and worked in hospital clinical labs, then took a graduate degree in Microbiology and turned to college teaching for the next three decades. She also worked as a dog show vendor, creating her own line of dog breed themed jewelry. She commented “There was plenty of fine gold jewelry out there, but I thought there might be others like me that either couldn’t afford it or if they could, were afraid they’d lose it! So I went after the market of upscale costume jewelry—something nice that you would wear somewhere else besides the dog show.” What sold the jewelry was the breed-correct depiction of the dogs, and its durability.

Pat has bred over 100 show champions, 5 MACH Lakelands (one of them attaining MACH5), and a high percentage of all AKC Earthdog titles earned by Lakelands are Hollybriar owned or bred.

The American Staffordshire Terriers came on the scene when her younger son decided that was the breed he wanted. He wanted a show dog, but wanted Mom to show it. After a gap of more than 30 years Pat had a “wash-and-wear” breed to show again. “I would have never thought this breed would be compatible with Lakelands, but the Staffs are so incredibly tolerant of the Lakelands’ antics.”

Pat commented “I guess I was just born to be a breeder. I was one of those horse crazy kids who couldn’t afford a horse so as an adult I bought one, an Arabian since that breed had always appealed to me. Pretty soon I thought ‘Hmmm…this mare is good here, but could be improved there’ and next thing you know I bred her and then spent 30 years in bloodline preservation breeding 100-mile-in-a-day endurance race horses.”

Pat has been a member of the United States Lakeland Terrier Club since the early 1970’s, has served terms on the Board, also as President, has chaired the Health Committee, brought about the club’s first Breed Health Survey, has written columns for the AKC Gazette for many decades, was instrumental in the enrollment of the breed in the UCDavis Canine Genetic Diversity Project, an ongoing endeavor to preserve as much genetic diversity in the gene pool as possible for the preservation of the breed into the future. She is active in Judge’s education, has chaired the first and second Lakiepalooza events, and is looking forward to continuing to be active in promoting the breed she loves so much.